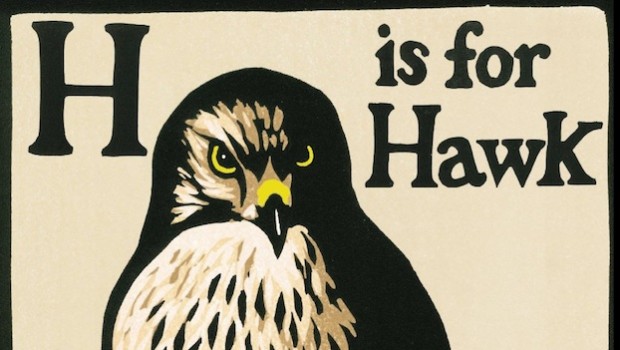 H is for Hawk by Helen Macdonald

Blurb: As a child Helen Macdonald was determined to become a falconer. She learned the arcane terminology and read all the classic books, including T. H. White’s tortured masterpiece, The Goshawk, which describes White’s struggle to train a hawk as a spiritual contest. When her father dies and she is knocked sideways by grief, she becomes obsessed with the idea of training her own goshawk. She buys Mabel for £800 on a Scottish quayside and takes her home to Cambridge. Then she fills the freezer with hawk food and unplugs the phone, ready to embark on the long, strange business of trying to train this wildest of animals. Destined to be a classic of nature writing, H is for Hawk is a record of a spiritual journey – an unflinchingly honest account of Macdonald’s struggle with grief during the difficult process of the hawk’s taming and her own untaming. At the same time, it’s a kaleidoscopic biography of the brilliant and troubled novelist T. H. White, best known for The Once and Future King. It’s a book about memory, nature and nation, and how it might be possible to try to reconcile death with life and love.

“The quality that distinguishes this fine writing from Fine Writing is Macdonald’s passion for precision. Her eye is every bit as educated as her mind… It is an exceptional achievement.”

“In fact it is fair to say that H is for Hawk, apart from its oddly lacklustre title, will be a classic. Whether or not the TH White excursions are a success or a liability is hard to say, and they are certainly deeply embedded in the book. It deserves to sell shedloads and win prizes, it is naturalist writing of that spectacular quality that is literature too.”

“I can’t remember the last time a book made me feel so many different things in such quick succession. It’s difficult to be with grief. It’s exhausting; your life-grabbing instinct is to get away from it, which is what makes it so lonely for those in its grasp. There were times when I felt like I could not bear another moment of Macdonald’s sadness. It’s fair to say that she goes a little mad. But then she would head out with Mabel on her arm, and it was as though the clouds had cleared, every sentence a blessing, like the sunshine of early spring.”

“[An] exhilaratingly honest and passionately broadminded book… This book has a lot to say about snobbery and old elites, civilisation’s failures and what White calls the ‘savagery of the human heart’… But it is in her descriptions of nature that Macdonald really excels. Blissfully at home traversing the ‘rabbit-grazed sward’ and breathing in air ‘reeking of pine resin’ or ‘the pithy vinegar of wood ants’, she is almost equally canny about ‘the collapsing echo of a passing train’ or the ominous flickering of faulty strip lighting, undecided about whether to ‘illuminate the room or cease working entirely’. And, of course, it’s the hawks themselves, murderous, sulky, fractious, foreign and ‘the wildest and proudest of living creatures’ ,which really come alive.”

“This book is a soaring triumph. It is a joy to follow Mabel and Macdonald’s flight out of such disconsolate scenes as one settles into a new roost and the other gradually comes to realise that “hands are for other human hands to hold. They should not be reserved exclusively as perches for hawks.”.”

“You can write from the head or from the heart, from the intellect or the emotions. The best kind of writing – and it is rare – does both those things at once. It’s rare because it can be so very painful to produce, the discipline required to sit with raw feelings and turn them into ordered words not unlike the courage it would take to hold your hand on a hot radiator until it burns, and then force it back there, again and again. Macdonald has done just that, and the result is a deeply human work shot through, like cloth of gold, with intelligence and compassion – an exemplar of the mysterious alchemy by which suffering can be transmuted into beauty. I will be surprised if a better book than H is for Hawk is published this year.”

“What she has achieved is a very rare thing in literature — a completely realistic account of a human relationship with animal consciousness. Poetic equivalents that come to mind are Gerard Manley Hopkins’s The Windhover and Ted Hughes’s Hawk Roosting. But they are masterpieces of the imagination, whereas Macdonald is imaginative and factual at the same time. Her training of Mabel has the suspense and tension of the here and now. You are gripped by the slightest movement, by the turn of every feather. It is a soaring performance and Mabel is the star.”

“Like her friend the author Tim Dee (Four Fields, 2013), or her contemporary Jay Griffiths (Wild, 2006), she extends the boundaries of nature writing. As a naturalist she has somehow acquired her bird’s laser-like visual acuity. As a writer she combines a lexicographer’s pleasure in words as carefully curated objects with an inventive passion for new words or for ways of releasing fresh effects from the old stock. Her one overriding concern is always to provide an exact transcription of what is there to be seen or to be felt.”

“Vivid and fascinating… Full of sentiment it may be, but Macdonald’s book avoids sentimentality.”

“Macdonald has just the right blend of the scientist and the poet, of observing on the one hand and feeling on the other… she is also very good on the history of the hawk and the hawk’s ability to catapult its handler back through history.”

H is for Hawk by Helen Macdonald The Omnivore