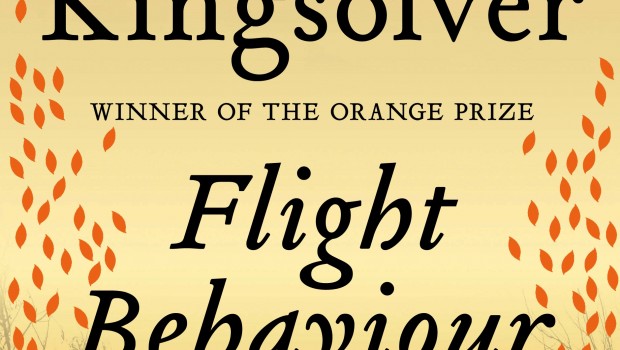 Blurb: On the Appalachian Mountains above her home, a young mother discovers a beautiful and terrible marvel of nature. As the world around her is suddenly transformed by a seeming miracle, can the old certainties they have lived by for centuries remain unchallenged? Flight Behaviour is a captivating, topical and deeply human story touching on class, poverty and climate change. It is Barbara Kingsolver’s most accessible novel yet, and explores the truths we live by, and the complexities that lie behind them. (Faber and Faber)

“Flight Behaviour contains a strong environmental message without preaching. Through Dellarobia and her family, Kingsolver shows it is possible for people to put short-term personal gain to one side.”

Rachel Hore, The Independent on Sunday

“Much of Kingsolver’s remarkable body of work, here as elsewhere, links big scientific themes with fine subtleties of human behaviour. She moves easily between the grandiose and the personal. Flight Behaviour is perhaps closest to her 2000 novel Prodigal Summer, with its small-farm setting and its fears for the natural world, but now her warning about the precariousness of our ecosystems is almost shouted. Ovid spells out the science clearly: how the number of carbon molecules the atmosphere can hold to maintain the ordinary thermal balance has already been exceeded, and still mounts. On occasion this message threatens to overbalance the novel, but the author always pulls back in time.”

“At times, the author’s message is a little too clear, especially when head scientist Dr Ovid Byron – a man as hunky as his name suggests – is lecturing us all on greenhouse gases. On the whole, though, Kingsolver is far too much of a pro not to anchor the book in the sharp, touching and often ruefully funny story of Dellarobia’s Educating-Rita-style realisation of how constricted her life has been. ”

“One of the gifts of a Kingsolver novel is the resplendence of her prose. She takes palpable pleasure in the craft of writing, creating images that stay with the reader long after her story is done. The church choir sings a hymn, “dragging it like a plow through heavy clay”; the pastor uses “his hands to push and pull his congregants as if kneading dough and making grace rise.” Dellarobia walks under “this mess of dirty white sky like a lousy drywall job.” Her husband’s gentleness is “merely the stuff he was made of, like the fiber content of a garment.””

“A compelling plot with lyrical passages and flashes of humour. Absorbing and entertaining, Flight Behaviour engages the reader in the quotidian details of Dellarobia’s life, while insisting that we never forget the crumbling world beneath her, and our, feet.”

“Kingsolver has an extraordinary understanding of family dynamics; her theme is climate change of every kind, and her prose is dense, lush and lovely.”

“This may be the saintliest novel ever predicated on the persistent temptation of adultery. But even if the sheets don’t heat up, the earth does. Kingsolver has written one of the more thoughtful novels about the scientific, financial and psychological intricacies of climate change. And her ability to put these silent, breathtakingly beautiful butterflies at the center of this calamitous and noisy debate is nothing short of brilliant.”

“Many reviewers, predictably dismissing Kingsolver as earnest but naive, or scolding her for not knowing where monarch butterflies winter, evidently don’t know how to read a writer so gifted at seeing and portraying both sides of a social dilemma, and so adept at invention based firmly on knowledge of the world. This scientifically trained novelist uses imagination to illuminate reality. In her hands, the conventionally baroque and grotesque ‘Southern novel’ gains the breadth and aplomb of South American magic realism. ”

“In general, Flight Behaviour is an impressive work. It is complex, elliptical and well-observed. Dellarobia and her kin come over as solid but believable individuals, outlined with respect and balance. Even Cub, her much put-upon simpleton of a husband, and his dreadful, manipulative mother Hester, are ultimately accorded sympathy. Much is also made of the Turnbows’ poverty, almost to the point of overkill.”

“She is certainly brilliant at creating three-dimensional characters and getting us to care about them. Dellarobia is intelligent and frustrated … However, the biggest challenge is to convey a message of environmental calamity without sounding contrived — and here she is less successful. She originally studied biology, and her non-fiction book, Animal, Vegetable, Miracle (2007), was an account of her family’s year of eating only local or home-grown food. She is clearly deeply engaged. But the science in this novel — and there is a lot of it — feels curiously heavy handed.”

“Over the course of a career with several bestsellers, including The Poisonwood Bible, Kingsolver has built a reputation as a skilled novelist unafraid to tackle issues of inequality and cultural conflict. With Flight Behavior, however, Kingsolver appears to be turning her back on serious literary aspirations. The writing is often turgid and peppered with mixed metaphors and sloppy similes. “The heels of her oxblood boots struck the waxed floor loudly,” Kingsolver writes when Dellarobia enters a church, “advertising her traveling whereabouts like a GPS.” More than anything, it’s the not-subtle condescension of Flight Behavior that strips the work of artistic weight.”