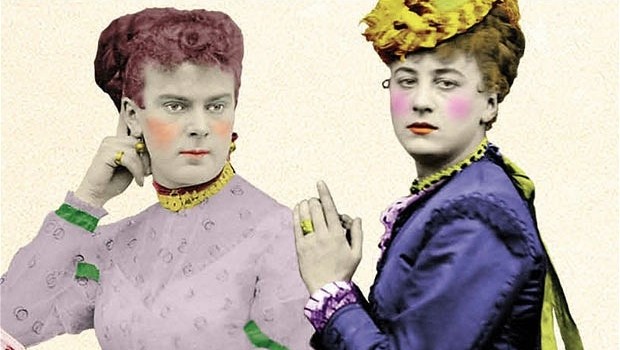 Fanny and Stella: The Young Men Who Shocked Victorian England by Neil McKenna

Blurb: 28th April 1870. The flamboyantly dressed Miss Fanny Park and Miss Stella Boulton are causing a stir in the Strand Theatre. All eyes are riveted upon their lascivious oglings of the gentlemen in the stalls. Moments later they are led away by the police. What followed was a scandal that shocked and titillated Victorian England in equal measure. It turned out that the alluring Miss Fanny Park and Miss Stella Boulton were no ordinary young women. Far from it. In fact, they were young men who liked to dress as women. When the Metropolitan Police launched a secret campaign to bring about their downfall, they were arrested and subjected to a sensational show trial in Westminster Hall. As the trial of ‘the Young Men in Women’s Clothes’ unfolded, Fanny and Stella’s extraordinary lives as wives and daughters, actresses and whores were revealed to an incredulous public. With a cast of peers, politicians and prostitutes, drag queens, doctors and detectives, Fanny and Stella is a Victorian peepshow, exposing the startling underbelly of nineteenth-century London. (Faber, 2012)

“How to Be a Heroine is an honest, warm and readable book about the plots we follow in order to make sense of our lives, the selves we adopt as we grow up and the selves we shed – like ‘old whore petticoats’, as Sylvia Plath put it – as we grow out of them. At its heart is an exploration of the way women read: diving in with abandon, losing ourselves in words, collapsing into characters, only ever half returning to real life … Wise, courageous and endlessly generous, Ellis is something of a heroine herself.”

“His writing has much of the performative element that characterised Stella and Fanny’s appearances on the streets of London and in provincial halls. Showy as a feather boa, McKenna’s text takes pleasure in its own silly excess. There are drawers galore, plenty of back passages and chapter titles such as Monstrous Erections, which turns out to refer to the size of his heroines’ wigs. Purists and puritans may balk at the book, both its tone and its way of proceeding. But everyone else will have a ball.”

“...there is real value in this telling of the Boulton and Park story, which exposes the extent to which gender was mutable in the middle of the 19th century… McKenna quotes freely from the pornography of the period, which might be thought of as less reliable than testimony in court. However, professionals had their own fictions: the first police surgeon who examined the couple was working in the belief that people who have abnormal sex must have abnormal sex organs.”

“The trial of “The Funny He-She Ladies”, as the press dubbed them, was the sensation of the age. Neil McKenna’s highly readable, painstakingly researched recounting brings it roaring back to life.”

“The more McKenna’s style strays into Mills and Boon fantasy, the surer one can be that he has nothing concrete to go on. Fanny and Stella, described on the dust jacket as ‘dazzlingly written’, is full of naff phrases and clichés … It is a pity that such a powerfully symbolic event should be treated so self-indulgently. One can appreciate the unimportance of being earnest while still hankering for a touch more seriousness.”

Fanny and Stella: The Young Men Who Shocked Victorian England by Neil McKenna The Omnivore