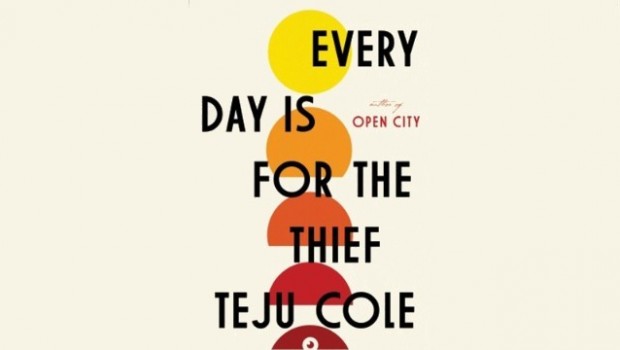 Every Day is for the Thief by Teju Cole

Blurb: A young man returns to Nigeria after fifteen years in New York. Like him, the country of his childhood has grown up quickly: found fast-food restaurants, email cafés, contempt for authority; the all-consuming draw of ‘money for nothing’. From the consulate in Manhattan to the dusty streets of Lagos, life in modern Nigeria runs like clockwork – as long as you pay the fee. A bribe for the visa clerk, a ‘Christmas gift’ at immigration, cash – no receipt – at the unofficial tollbooth. Petrol pumps are rigged to overcharge and internet cafés overflow with career scammers (‘Dear friend…’), but the police are too busy doling out bogus fines to care. In a country routinely plundered of its oil and ancient treasures, who is to say who can thieve and who can’t? As our narrator makes the difficult journey back to his family house and its memories, he is confronted by the paradox of a country he wants to love, as burdened by its impoverished past as it is blinded by the spoils of the future. Every Day is for the Thief – now published for the first time outside Nigeria – is a candid tale of political and spiritual corruption, and a moving account of what it means to go home. (Faber & Faber, April 2014)

“One of the things I immediately loved about Every Day is for the Thief is its refusal to conform to genre, which makes reading it, especially after a steady stream of plot-driven novels, feel like coming up for air. Cole flirts with novel, memoir, travelogue and essay all at once, choices that promise fresh possibilities of engaging with the book. Of course genres are helpful but sometimes it takes a work such as this to push us to consider their necessity, and simply to remind us that stories are stories.”

“The nameless narrator of Cole’s Every Day Is for the Thief shares so much with Julius, the flâneur of Open City, that this crisp, affecting novella (originally published in Nigeria in 2007) often feels like an extension of the novel.”

“It is not always a comfortable read. As he wanders the city in an attempt to reclaim the familiarity and ease he felt here as a child, it soon becomes obvious that the protagonist’s personality and frames of reference have undergone an irreversible shift. The people – his people – become a generalised “they” in most instances, and comparisons are almost always presented against a standard benchmarked on foreign notions of achievement and progress. This could have been an unpalatable tale of complaint and reckless fault-finding were it not for the subtle elegance of Cole’s characterisation.”

“Whereas Open City was a powerful, intellectual and philosophical work that disrupted stereotypes, it also appeared heavily indebted to the strikingly original prose style of the late WG Sebald. Every Day Is for the Thief is a slighter and more predictable work, but the writing is still impressive, with some memorable scenes and insights.”

“The tone of “Every Day Is for the Thief” isn’t so much outraged as coolly observational. His anger at Lagos’s dysfunction is tempered by glimpses of culture during his travels: a jazz club, a woman reading on the bus. Such moments can’t patch over the city’s corrosion, but they explain his reluctance to dismiss the place. Cole love-hates Lagos the way Martin Amis love-hates London, Edwidge Danticat love-hates Haiti or Nelson Algren love-hated Chicago.”

“Mr. Cole’s novels can summon contradictory voices in your own mind. At times, they lack the emotional density of the best fiction. There’s no contrapuntal play of egos and ids; the flashlight beam of his imaginative sympathy has not yet extended itself very far outward. Yet his novels are lean, expertly sustained performances. The places he can go, you feel, are just about limitless. .”

“Teju Cole has a photographer’s eye for detail. A goat on its knees reaching for stunted grass, a determined struggle for survival, suddenly gives way to another kind of struggle: local boys brazenly extorting money from the narrator’s uncle and aunt. Each chapter takes us to another setting, another institution – a museum, a market, a bookstore – which the author then uses to examine the general state of politics or art or religion in Nigeria.”

“Whether Every Day Is for the Thief aspires to be fiction or reportage, Aunty Folake embodies the tensions of modern Nigeria, and it’s odd to have her exempted from scrutiny, given a lot less attention than a goat, lovingly described as it crops the inadequate grass of the field, lowered head and elevated rump giving it the look of a plane in the process of landing. What could have been a strong climax for the book has been left undramatised, even de-dramatised. When the narrator heads out into the city to ‘escape family’ the phrase seems a strange one, since family has hardly been introduced in the first place.”

Every Day is for the Thief by Teju Cole The Omnivore