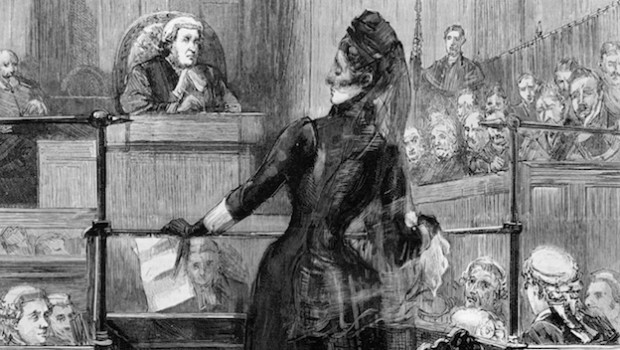 Did She Kill Him?: A Victorian Tale of Deception, Adultery and Arsenic by Kate Colquhoun

Blurb: In the summer of 1889, young Southern belle Florence Maybrick stood trial for the alleged arsenic poisoning of her much older husband, Liverpool cotton merchant James Maybrick. ’The Maybrick Mystery’ had all the makings of a sensation: a pretty, flirtatious young girl; resentful, gossiping servants; rumours of gambling and debt; and torrid mutual infidelity. The case cracked the varnish of Victorian respectability, shocking and exciting the public in equal measure as they clambered to read the latest revelations of Florence’s past and glimpse her likeness in Madame Tussaud’s. Florence’s fate was fiercely debated in the courtroom, on the front pages of the newspapers and in parlours and backyards across the country. Did she poison her husband? Was her previous infidelity proof of murderous intentions? Was James’ own habit of self-medicating to blame for his demise? Historian Kate Colquhoun recounts an utterly absorbing tale of addiction, deception and adultery that keeps you asking to the very last page, did she kill him?

“This is a fascinating, meticulously researched book, full of period detail. Colquhoun’s success in weaving together a series of complex topics is no mean feat and an even greater achievement is to have presented them clearly and simply… It is hard to keep a hold of Florence’s personality when she is recreated largely from the defence and prosecution portraits put forward at her trial and afterwards. And we get too much detail on the precise ins and outs of the trial. Despite this, the book is both dramatic and moving.”

“Sensibly, if tantalisingly, Kate Colquhoun offers no final answers in her absorbing review of this old scandal. Instead, she highlights what the case can tell us about late Victorian England – its flawed legal processes and dangerous medical practices, its predatory appetite for gossip, and above all the uncertain position of its women. What Colquhoun reveals is a persistent doubleness – respectability concealing transgression, but also a startling readiness to challenge authority.”

“Enlivened by imaginative detail (‘The cold chill of brick seeped into her back”), Colquhoun’s lively and perceptive narrative has the reader rooting for the friendless defendant whose two children were whisked away at the start of the trial by James’s brother Michael, her main persecutor. Yet there is something cold, unsympathetic and dull about the tightly self-controlled Florence.”

“Colquhoun’s research is exhaustive. No detail of Maybrick’s decline or the legal case is left out. Yet in all her reading in the archives she has not turned up the killer piece of evidence that the police and the barristers missed first time round. Without it, the trial of Florence Maybrick remains deeply unsatisfying. In an afterword, Colquhoun lists a string of unanswered questions: more than forty-six in all. The case is thrilling, the trial harrowing, and Colquhoun does them justice, but still the frustrating question hangs in the air. Well, did she?”

“Kate Colquhoun renders the story in a vivid, novelistic style that occasionally goes too far (“Somewhere close, a floorboard creaked”). She avoids giving a final verdict and, instead, shows how the trial cut to the heart of Victorian life, exposing deeply conflicted values. Drawing on contemporary sources, she traces how attitudes towards Florence shifted as the case progressed… Gripping stuff.”

“It’s a fascinating tale that has been chronicled many times before, but is always worth hearing again. My only reservation is that Colquhoun seems to have imbibed some of the purple prose of the era, and her language tends towards the overwrought.”

“Unlike Mr Briggs’ Hat, which led Colquhoun into hidden byways of 19th-century Britain, this one confines her narrative to the stifling atmosphere of Florence’s home. Under the surveillance of hostile in-laws, Florence was silly before her drama began, and scared after it: “Like a poor little rabbit,” said her mother, “chased by dogs until it has neither sense nor spirit left.” Colquhoun alludes often to Thomas Hardy and Henry James, but this little bunny is nothing like Tess, or Maggie Verver in The Golden Bowl. The futility of Florence’s life, and her feeble character, give this book a weak heart. It has, though, fine passages.”

“Her story, a moral fable of the age, is intelligently told by Colquhoun, who places her sources cleverly within historical and literary context. Although gripping, the book can also be irritating, for the author’s Achilles’ heel is a tendency to lapse into the literary style of the time. This can make for prolix passages and too much unnecessary detail, although those who love intricate whodunnits and unflinching descriptions of post mortems will lap it up.”

“Kate Colquhoun has a complicated and fascinating story to tell. She has researched the case well… Colquhoun’s account of the tangles of contradictory evidence presented at the trial is clear and the connections she makes with the state of late-Victorian society are intriguing. It is a pity, therefore, that she is an awkward writer, who does her story no favours with her fondness for lush ‘imaginative reconstruction’ from her heroine’s point of view, strings of rhetorical questions and a tendency to use words in odd contexts, telling the reader, for example, that the defection of her lover ‘threw Florence into a hiatus’ and that a witness ‘acceded that’. Her unattached participles, in particular, grated on me. It was perhaps unfortunate that I had recently been reading Patrick Leigh Fermor. The evocative brilliance of his style made a depressing contrast.”

Did She Kill Him?: A Victorian Tale of Deception, Adultery and Arsenic by Kate Colquhoun The Omnivore