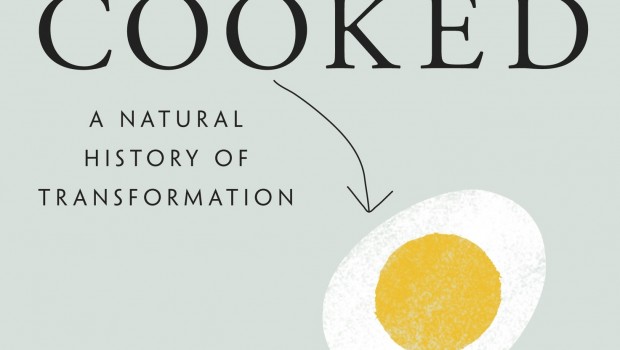 Cooked: A Natural History of Transformation by Michael Pollan

Blurb: In a culture of celebrity chefs and food reality shows, in countries which are crammed with fresh ingredients flown in from every corner of the Earth, we nonetheless year-on-year wade ever deeper into a great swamp of processed foods. The more we watch food on television, the less food we actually prepare and cook. Michael Pollan’s marvellous new book is a clarion-call for the virtues and values of proper cooking – an essential, defining human activity which sits at the heart of our cultures, shapes family life and is in itself hugely enjoyable. Pollan recreates the transformative fundamentals of how we cook, building from the most basic principles: cooking with fire, cooking with water, cooking with air and cooking with earth. Cooked is an extremely funny and surprising plea to Pollan’s readers to take control of their own fates and revel again in what should be a lifetime’s engagement with the almost magical activity of making food. And it is, of course, about so much more – how cooking can transform both how we think about ourselves and about our families and friends. (Allen Lane)

Michael Pollan: ‘Cooking is a political act’ | The Independent

Michael Pollan: Why the family meal is crucial to civilisation | The Guardian

Michael Pollan: we need to rewrite the restaurant rule book | The Telegraph

“A major work by an interesting thinker, this genre-busting volume will someday become a standard text in a standard university department – though no satisfactory one yet exists – that will teach and research the discipline of “Food Studies”, encompassing economics, history, philosophy, anthropology, several fields of life sciences and the humanities.”

“It’s not often that a life-changing book falls into one’s lap. Especially, it has to be said, with “The New York Times No 1 Bestseller” splashed across the front. Yet Michael Pollan’s Cooked is one of them. One it’s impossible to read and not act on.”

Marianne Levy, The Independent on Sunday

“It’s hard to imagine anyone on a diet of ready meals tackling many of the recipes he mentions. But Pollan is leading by example. It’s hard to put the book down without a twinge of desire to mess around with pots and pans. And, in that sense at least, Cooked is a delicious triumph.”

“Pollan has done a lot of reading and, by God, he wants you to know it … Pollan is rather obsessed by authenticity in food, setting up the industrial food process as the Visigoths rampaging across the plain to mount a final assault upon the citadel of the true human culinary experience. At this point it all gets, well, a little overcooked. He is bang on in his critique of ready meals: the soul-destroying business of choosing and cooking them, the way dizzying choice saps the will and ends up saving neither time nor money. But to define food cooked at home as in some way more “authentic” is to fall for one of the great red herrings of modern gastronomy.”

“Cooked is particularly informative about the rapidly moving scientific frontier of microbial ecology and how, in a post-Pasteurian world, the live-culture foods which used to make up a large part of the human diet are good for people and for the microbes that live inside the gut.”

“A life involving no home cooking, Pollan convincingly argues, is a life diminished … But instead of considering ways to make cooking easier to fit into time-pressed lives, he sets off on a personal quest — albeit written with all his trademark lyricism — to master techniques that are perversely slow and difficult, from cheese making to kimchi fermentation. The big message of “Cooked” is: Cook more. But Pollan’s angle widens the gap between cooks and noncooks.”

“… no matter how renowned the teachers he chooses, Mr. Pollan is the star of this four-stage cooking show … whenever food starts making Mr. Pollan feel “deep Proustian echoes” coming on, it’s time to turn the page.”

“… do not, I repeat not, make the mistake of reading Cooked. For to say that Pollan writes like a drain is woeful understatement. He writes like a soil pipe. Like the fat trap at your local Nando’s. And he does it in that way that is peculiar to stalwarts of The New York Times bestseller list (on which Cooked made it to No 1), with a style that hitches ceaseless repetition of the toweringly obvious to misgrasped gobbets of popular philosophy and endless rhetorical questions.”

Cooked: A Natural History of Transformation by Michael Pollan The Omnivore