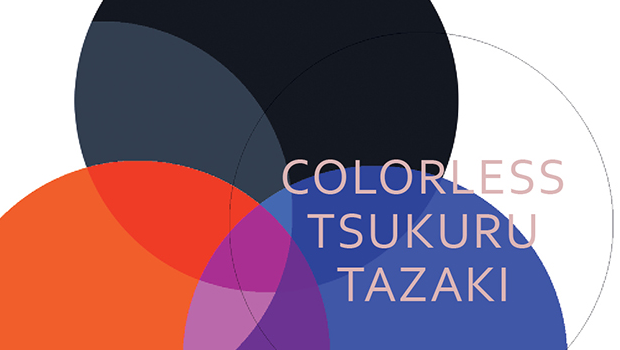 Colorless Tsukuru Tazaki and his Years of Pilgrimage by Haruki Murakami

Blurb: Tsukuru Tazaki had four best friends at school. By chance all of their names contained a colour. The two boys were called Akamatsu, meaning ‘red pine’, and Oumi, ‘blue sea’, while the girls’ names were Shirane, ‘white root’, and Kurono, ‘black field’. Tazaki was the only last name with no colour in it. One day Tsukuru Tazaki’s friends announced that they didn’t want to see him, or talk to him, ever again. Since that day Tsukuru has been floating through life, unable to form intimate connections with anyone. But then he meets Sara, who tells him that the time has come to find out what happened all those years ago. (Harvill Secker, August 2014)

“Murakami regards his characters with a level of compassion that borders on the godlike, producing a moving and heartfelt sense of people essentially trying to do their best … It’s possible, I suppose, that hard-core Murakami fans might miss some of his more extravagant, full-blown flights into magic realism. Nonetheless, this is a rich and even brilliant piece of work that pulls off the tricky feat of being genuinely resonant and satisfying, while still keeping some of its secrets hanging tantalisingly out of reach.”

“Rather than sliding into the surreal, Colorless Tsukuru Tazaki and His Years of Pilgrimage tracks steadily into elegiac, nostalgic territory, with an acuity that, at points, is very affecting. The writing, unobtrusively translated from the Japanese by Philip Gabriel, is by turns off-key, banal, then piercingly accurate or memorable, above all in the similes on nearly every page. (‘Like a distraught mind, the branch quivered slightly, then returned to stillness’; ‘A distinct half moon hung above, like a battered piece of pumice stone that had been tossed by someone and gotten stuck in the sky’.)”

“If at the start of his career Murakami could be a little glib, a little (yes) superficial when it came to such considerations, that is no longer the case. Here, as in his last book, the magnificent “1Q84,” as well as “Kafka on the Shore,” “After the Quake,” and even “Underground” (a nonfiction account of the 1995 sarin gas attack on the Tokyo subway), he has opened his vision, his sensibility, to reflect the distances implicit in being alive.”

“Like his adored Graham Greene, Murakami confronts big themes (friendship, forgiveness, the betrayal of loyalties) with a sombre eye. His gift as a novelist is to locate the moment of crisis when a character loses faith, religious or otherwise, and life is exposed in all its drab wonder. Colorless Tsukuru, a work of lapidary and suspenseful mystery, goes to the heart of questions about human solitude and yearning to connect. Admirers of Murakami’s previous novels —  Norwegian Wood, The Wind-Up Bird Chronicle — will not be disappointed.”

“Set alongside the parallel-universe dystopian extravaganza of 1Q84, this novel feels as modestly functional as the commuter stations its hero builds. We follow a standard-gauge Bildungsroman track from youthful togetherness through a life-crisis of solitude and wandering, until the terminus of sadder-but-wiser maturity edges into view. All the same, Colorless Tsukuru… does share a design and livery with much of Murakami’s previous work, not only in the prominence of music, dreams and cults but in glimpses of an alternative reality.”

“For all its familiarity, I read Colorless Tsukuru as I have read all Murakami’s previous books, with the exception of the sprawling, often frustratingly tangential 1Q84: voraciously while, simultaneously not wanting it to end. Inevitably, Tsukuru becomes less colourless, less lost as the story unfolds. The big lesson he learns about living is that one cannot do it fully without risk – the risk of disappointment, heartbreak or, as he puts it, “getting lost in the dark forest”.”

“The novel won’t go down as Murakami’s best. For me, that prize belongs to Hard-Boiled Wonderland and the End of the World (1985), which, as the title suggests, is larger in scope than a teenage falling-out. But Colorless Tsukuru Tazaki is one of his most coherent and, in its tight and tidy way, one of the most satisfying. Those who miss the goat-heads and the demons and the parallel worlds in which anything can happen shouldn’t worry. There’s enough unresolved human mystery in this novel to suggest that they’ll be back.”

“This is a book for both the new and experienced reader. It has a strange casualness, as if it unfolded as Murakami wrote it; at times, it seems like a prequel to a whole other narrative. The feel is uneven, the dialogue somewhat stilted, either by design or flawed in translation. Yet there are moments of epiphany gracefully expressed, especially in regard to how people affect one another.”

“The dialogue often consists of people exchanging strange aphorisms (“The truth sometimes reminds me of a city buried in sand…”). Then there are the outlandish similes whose beauty lies in their oddness: “Tsukuru felt his chest tighten with a disconsolate, stifling feeling as if… he’d swallowed a hard lump of cloud.” At one point, a character says people should respond to weird stories “like the way a snake will swallow its prey and not chew it, but instead let it slowly digest.” Murakami is tipping us the wink there about the best way to approach his book. “

“Although as adept as ever at setting up Kafkaesque ambiguity and atmosphere, he disappointingly chooses to leave most of the mysteries unresolved.”

“It is an uneasy book, strangely beautiful at times, occasionally intensely moving, but sometimes frustratingly conventional and emotional vapid. Murakami’s simple, stripped-back sentences can be spell-binding, with the hushed quality of magic, of dark enchantments, at other times they are prosaic to the point of boredom. The extraordinary and the very ordinary live side by side in this novel of loneliness and loss, but unfortunately, not entirely successfully. “

“Murakami … wants to dramatise the kinds of situation in which language is inadequate and must work extra hard … Recourse to language that throws up its hands isn’t always bogus. But the retreat from expression is something else entirely when the predicament being confronted feels too low-stakes and played-out to merit evocation in the first place.”

“Murakami’s story wholly lacks suspense . And it’s peppered with the kind of yawn-inducing wisdom you might find in Wittgenstein fortune cookies, eg: “Some things in life are too complicated to explain in any language.” Could be … but it’s worth the read, if only for the piquant strangeness.”

“Murakami’s strong, plain prose seems not just flat, but banal in this novel. Similes seem obvious. Clichés abound. Descriptions are long and repetitive.  Characters talk, as if they are Californian, about their “comfort zone” and having “no sense of self”. At times, there are flashes of the old poetry — rain felt “by the slight variation in the air against…skin”, eyes “like a mountain spring, glimpsed through a gap in the trees” — but these are rare. The general feeling is of covering territory that has been much, much better covered before.”