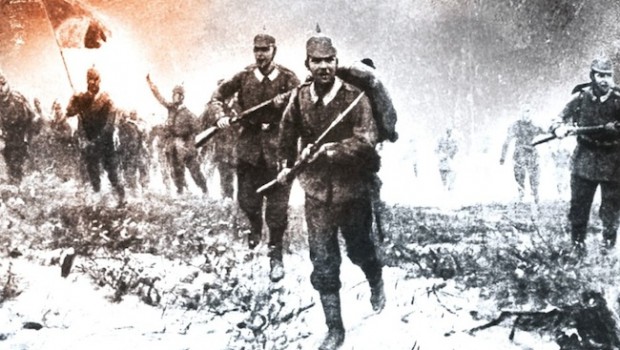 Blurb: From the best-selling author of All Hell Let Loose comes a magisterial chronicle of the calamity that befell Europe in 1914 as the continent shifted from the glamour of the Edwardian era to the tragedy of total war.

In 1914, Europe plunged into the 20th century’s first terrible act of self-immolation- what was then called The Great War. On the eve of its centenary, Max Hastings seeks to explain both how the conflict came about and what befell millions of men and women during the first months of strife.

He finds the evidence overwhelming, that Austria and Germany must accept principal blame for the outbreak. While what followed was a vast tragedy, he argues passionately against the ‘poets’ view’, that the war was not worth winning. It was vital to the freedom of Europe, he says, that the Kaiser’s Germany should be defeated.

His narrative of the early battles will astonish those whose images of the war are simply of mud, wire, trenches and steel helmets. Hastings describes how the French Army marched into action amid virgin rural landscapes, in uniforms of red and blue, led by mounted officers, with flags flying and bands playing. The bloodiest day of the entire Western war fell on 22 August 1914, when the French lost 27,000 dead. Four days later, at Le Cateau the British fought an extraordinary action against the oncoming Germans, one of the last of its kind in history. In October, at terrible cost they held the allied line against massive German assaults in the first battle of Ypres.

The author also describes the brutal struggles in Serbia, East Prussia and Galicia, where by Christmas the Germans, Austrians, Russians and Serbs had inflicted on each other three million casualties.

This book offers answers to the huge and fascinating question ‘what happened to Europe in 1914?’, through Max Hastings’s accustomed blend of top-down and bottom-up accounts from a multitude of statesmen and generals, peasants, housewives and private soldiers of seven nations. His narrative pricks myths and offers some striking and controversial judgements. For a host of readers gripped by the author’s last international best-seller All Hell Let Loose, this will seem a worthy successor.

“Hastings is a master of the pen portrait and the quirky fact: the term “no-man’s-land”, we learn, was first used “in medieval times to describe a patch of unowned ground … where executions were carried out”. Yet his greatness as a historian — never shown to better effect than in this excellent book — lies in his willingness to challenge entrenched opinion and say what needs to be said. He is, for example, justifiably furious that for reasons of diplomatic courtesy the government’s official Great War commemorations in 2014 will avoid any mention of blame.”

“Masterly … This is history-writing at its best, scholarly and fluent, relating with equal verve the attitudes and experiences of crowned heads and peasants, generals and privates, the handful of statesmen in seven countries whose decisions started the war, and the millions of ordinary people who fought it … [A] fine book.”

“Most military histories are written by hobbyists for hobbyists, like some peculiarly charmless kind of sports reporting. Hastings, by contrast, writes with an enviable grasp of pace and balance, as well as an acute eye for human detail. Even for readers who care nothing for the difference between a battalion and a division, his book is at once moving, provocative and utterly engrossing … Much as I admire Hastings’s book, I am not persuaded that the war was worth it.”

“His account of the fighting on the eastern front draws on powerful and unfamiliar material … but never quite builds into an authoritative text … By contrast, Catastrophe is magnificent on the western front … At times the Daily Mail columnist comes through, and the prose coarsens and the tone grows shrill, but overall it’s a splendid read.”

Catastrophe: Europe Goes to War, 1914 by Max Hastings The Omnivore