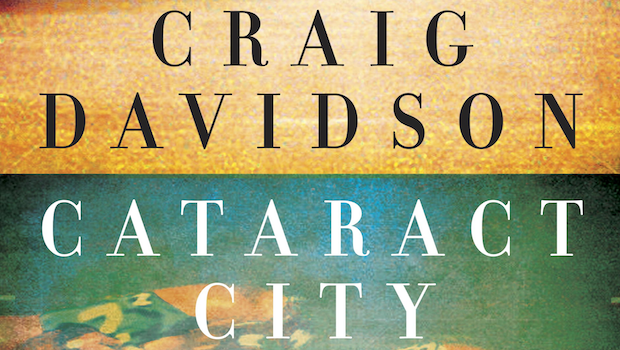 Blurb: Cataract City, a dead-end border town overlooking Niagara Falls. Owen Stuckey and Duncan Diggs are fast friends as kids – united by wrestling, go-karts, and metal bands – but as they grow into young men, their once simple affection competes with the tensions created by their respective circumstances. Owen, born to relative privilege, seems destined to get out of the city, while Duncan, honest but hard, is hurtling along the rails towards a future working the assembly line at the soulless biscuit factory, The Bisk. As Duncan becomes more and more desperate to escape, he finds himself at opposite ends of the law to Owen, and as the coils of the city creep ever tighter around the two friends, they find themselves struggling not to break free, but simply to survive. (Atlantic Books, February 2014)

“Cataract City has received huge plaudits in Davidson’s home country of Canada and was shortlisted for the prestigious Giller Prize, and it’s easy to see why. I can’t think of another prose stylist out there as visceral and  kinetic as Davidson – there is plenty of brutality within these pages but it’s described in such wonderfully textured and precise language as to render it utterly compelling.”

“Davidson has a reputation for macho writing and Cataract City has its fair share of drinking and fighting couched in dense, flinty prose. But its appeal is more far-reaching. He is a compelling storyteller, tackling big themes: the nature of time and friendship, and how we are formed by where we live. This novel doesn’t always make for easy reading, but it will stay with you long after you put it down.”

“It runs headlong into the “If it don’t read easy, it ain’t writ hard” school of tough-guy writing. Somehow, the sheer effort of trying to be more than it is draws attention to the moments when it falls short. It is easy enough to finger the book’s weak moments, and perhaps with more ruthless editing they would have been intercepted, but Davidson’s strengths are attractive and undeniable. Some scenes have the hurtle factor in spades — you can’t turn the pages fast enough. When he is good he is very good, but just when you think he has finally hit his stride, he meanders off into some would-be literary longueur.”

“It is hard to enjoy these outings into the new-macho landscape. Davidson’s insistence that they bear more symbolic weight than they can support only increases the reader’s struggle. In the first few pages ofCataract City we are given not just the truth – or trueness – of the weight of a gun, but the Niagara basin, “black and snaky … littered with the bones of men and boys who’d pitted their weight against it”; the titular image of a cataract, broad smooth water breaking into violence; and the image of a city of optical cataracts, where everyone’s moral sight is failing. We are already drenched in meaning and we’re barely 20 pages in; from then on things only intensify.”