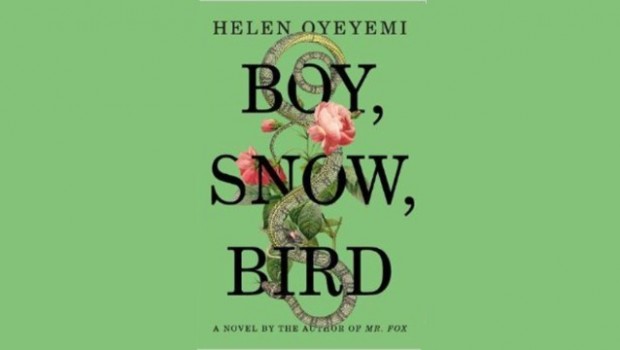 Blurb: BOY Novak turns twenty and decides to try for a brand-new life. Flax Hill, Massachusetts, isn’t exactly a welcoming town, but it does have the virtue of being the last stop on the bus route she took from New York. Flax Hill is also the hometown of Arturo Whitman – craftsman, widower, and father of Snow. SNOW is mild-mannered, radiant and deeply cherished – exactly the sort of little girl Boy never was, and Boy is utterly beguiled by her. If Snow displays a certain inscrutability at times, that’s simply a characteristic she shares with her father, harmless until Boy gives birth to Snow’s sister, Bird. When BIRD is born Boy is forced to re-evaluate the image Arturo’s family have presented to her, and Boy, Snow and Bird are broken apart. (Picador, February 2014)

“As usual, the Oyeyemi foundation is located in her fairy-tale comfort zone — in the case of “Boy, Snow, Bird,” the fairy tale is “Snow White.” She uses the “skin as white as snow” ideal as the departure point for a cautionary tale on post-race ideology, racial limbos and the politics of passing. It feels less Disney or German folklore and more Donald Barthelme’s 1967 novella “Snow White,” in which the political and the social poke through the bones of a pretty children’s tale, alarming us with its critical cultural import … Still, the greatest joy of reading Oyeyemi will always be style: jagged and capricious at moments, lush and rippled at others, always singular, like the voice-over of a fever dream.”

“In her manipulation of a succession of overlapping triangles of which the book’s title is only one, Oyeyemi suggests the possibility of a kind of redemption; that identities eventually settle, configure, cohere and that we all learn to live with the life that we have fashioned for ourselves. In an intriguing, sinuously attractive book full of jeux d’esprit and lightning skies that often part to reveal pain and turmoil, it is a welcome hint of stability and optimism, if not one that we should trust in entirely.”

“The book is pocked by the same lacunae that make ancient stories so unsettling. Admittedly, its thematic murkiness will strike some readers as frustrating. But while staying rooted in a largely modern, realistic setting, Oyeyemi captures that unresolvable strangeness in the original fairy tales that later editors — from Grimm to Disney — sanded away. As Boy says, “No revelation is immediate, not if it’s real.” This is real.”

“Helen Oyeyemi’s novels are often rich with myth: Grimms’ fairytales and Yoruba folklore in Mr Fox (2011); maternal hauntings in White is for Witching (2009); a dead twin/imaginary friend, in The Icarus Girl (2005). This, her fifth novel, echoes the story of Snow White, but refracted as if by a hall of mirrors so that one surface may show a wicked stepmother while another reveals a beautiful princess.”

“Oyeyemi does so much more than recycle. In lithe, spry prose, she reminds us how people can seize upon images of beauty – such as the Whitmans’ fixation with “being” white – even though those images are ultimately hurtful to those who so firmly believe in them. Her explorations of female comradeship – of the sort that welcomed Boy at Flax Hill – are beautifully written”

“As the novel’s fabulism piles up and complexities become ever more complex, some of the material, such as a sexual identity and transgender surprise late in the day, feels as if it hails from a psychic as well as a physical dimension where even the most willing reader might not be able to suspend her disbelief. However, one doesn’t wish to complain about a writer having too much of an imagination; there are far worse curses, or perhaps they are blessings, to be borne.”

“Oyeyemi has mastered the first-person voice of adolescent precociousness, but the characters remain lightly sketched. There are moments of virtuosic understatement, such as listing the ways characters regard their own reflection … Yet, in the same way that Snow and Bird sometimes find their own image missing from mirrors, the book suffers a malaise of blind spots; not least its indecisive flirting with magical realism, and the half-hearted topical references that intercept its fairytale timelessness. Fundamentally the book suffers from an affliction imposed on many youthful talents — woeful under-editing, as publishers tiptoe round the page, wary of throwing away the sentence that might just define a generation.”

“There is no doubting that Oyeyemi writes beautiful prose, can adopt a sassy American idiom with assurance and produces sentences that no one else would think of: “. . . there’s something about being chased by a big strong man with yellowish eye that makes you feel like an antelope in a bad situation.” The plethora of wise aunts and adopted grannies can be hard to differentiate, but Boy’s is a unique narrative voice, as is young Bird’s, when she temporarily takes over the storytelling. I still wish I could have taken a magic wand and magicked away the magic.”