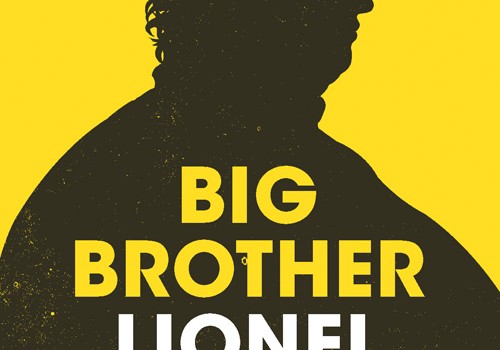 Blurb: When Pandora picks up her older brother Edison at her local Iowa airport, she literally doesn’t recognize him. The once slim, hip New York jazz pianist has gained hundreds of pounds. What happened?

Soon Edison’s slovenly habits, appalling diet, and know-it-all monologues are driving Pandora and her fitness-freak husband Fletcher insane. After the brother-in-law has more than overstayed his welcome, Fletcher delivers his wife an ultimatum: it’s him or me. (HarperCollins)

“One of the most suspenseful and engaging accounts of a diet that I can imagine reading. But then again, this is a novel about so much more than weight-watching … Just as interestingly, it’s a novel about sibling and familial responsibility, and the extent to which it’s possible, ethical, realistic or even desirable, to intervene … Most of all, though, there’s her glorious, fearless, almost fanatically hard-working prose. Nothing here feels half-hearted or accidental – the rhythm and weight and heft of each sentence is exactly judged.”

“It’s often funny but Pandora’s gruff love for her unhappy brother moves you too. I failed to remain dry-eyed at the moment when he’s playing the piano and she suddenly glimpses the cheekbones hidden beneath fat for so long.”

“Shriver likes literary experiment. The Post-Birthday World played with alternative realities, and Kevin itself was an epistolary novel, with a not-altogether reliable narrator. Pandora is an unreliable narrator too; more, she is sometimes a misleading one. This is cleverly handled, but self-defeating. Shriver has the precious gift, for a novelist, of telling a good story. If it turns out that the story may not be the one we thought it was, our insights crumble into dust, and we wonder why we bothered.”

“Gradually, Pandora pieces things together. She charts her brother’s life. As a young man, he was full of hope. He wanted to live life to the max. He took risks. He did well – for a while. He dosed himself with self-congratulatory drink and drugs. His wife left him. He didn’t realise that, at a certain point, you have to draw your horns in. He overreached, became obnoxious to people, got into debt. On several levels, he’s a metaphor for America. He’s too big. But not, as we can see, too big to fail.”

“Together, brother and sister embark on a binge slimming odyssey, allowing Shriver to indulge in a sustained rant about appetite, addiction, eating and self-control. She describes with zealous insight the self-deceptions, little lies, body dysmorphia, smell of ketosis and the plain disappointment people with eating disorders experience when they try to eat normally. While there are glimpses of empathy and attempts to understand Edison’s compulsive eating, what comes across most powerfully is Pandora’s disgust with food and Fletcher’s loathing of his wife’s “fat fuck lard arse bro”. ”

“It is, or appears to be, a redemption tale, and it’s one that is compellingly told. The characters are strong. The tensions — and hopes, and disappointments, and struggles — are well done. It is, at times, so moving it will make you want to gasp or cry. What itisn’t, though, is entirely convincing. In a twist that echoes one of the themes of The Post-Birthday World (and which I had better not give away), this is acknowledged, but pointing out a ­problem at the heart of your ­fiction isn’t quite the same as sorting it out … she also has a tendency to labour a point.”

“To continue the story is to spoil it; suffice to say the first half of the book is called “Up”, the second half “Down”, and the short last section is “Out”. It’s here that Shriver turns the story on its head and brings a novelist’s panache to the true-life tale. The conclusion is piercingly bleak in tone and formally original in execution. It takes the reader by surprise, reminding us, not a moment too soon, that Shriver is a novelist as well as a polemicist. ”

“Big Brother is a complex book about a complex subject: the West’s relationship with food. It is also, tangentially, about other important relationships: with parents, lovers, siblings and friends. And it is about how all those relationships interact, in all their flawed confusion … The book has only one problem: the ending. I won’t spoil it, but it’s a bit like when someone goes to shake your hand, making you extend your own — only for them to thumb their nose and waggle their fingers at you. It’s irritating and an act of literary weakness and self-deprecation: a writer as brilliant as Shriver should know better.”

“Pandora is a fun, plausible addition to Shriver’s stable of brittle, sarky, high-achieving, generally Shriver-esque protagonists; and Edison, in his hipster looseness, egomania and self-loathing, convinces too. Up to a point. Both characters also struggle under the burden of the sort of misjudged detail which often unbalances Shriver’s narratives … Despite these excesses, the book is pacy and enjoyable in its first section. It’s when Shriver turns it into a structural experiment that it gets really indigestible. ”

“It opens with a short treatise on the meaning of eating: “I have to wonder whether any of the true highlights of my fortysome years have had to do with food. I don’t mean celebratory dinners, good fellowship; I mean salivation, mastication and peristalsis.” Since peristalsis is physically imperceptible unless you have a blockage in your large intestine, how could anyone hold it as a highlight? The narration is full of these puzzles – ruminations that seem precise but are actually sloppy, explanations that are carefully elaborated but make no sense at all … This tragedy was regurgitated before it had been digested.”