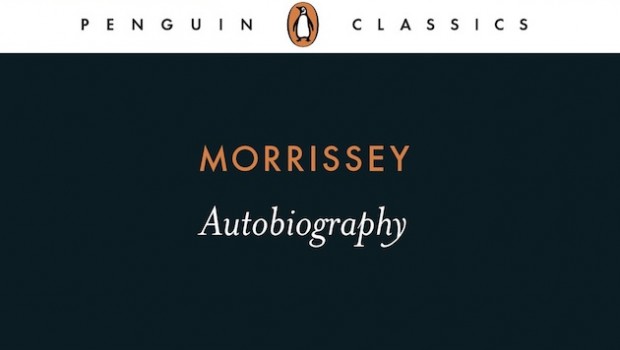 Blurb: Steven Patrick Morrissey was born in Manchester on May 22nd 1959. Singer-songwriter and co-founder of the Smiths (1982-1987), Morrissey has been a solo artist for twenty-six years, during which time he has had three number 1 albums in England in three different decades.

Achieving eleven Top 10 albums (plus nine with the Smiths), his songs have been recorded by David Bowie, Nancy Sinatra, Marianne Faithfull, Chrissie Hynde, Thelma Houston, My Chemical Romance and Christy Moore, amongst others.

It has been said ‘Most pop stars have to be dead before they reach the iconic status that Morrissey has reached in his lifetime.’

Autobiography covers Morrissey’s life from his birth until the present day.

“Yes, he’s self-important, but he’s never boring … Autobiography is overlong and you grow weary of the endless documenting of yet another grievance or perceived slight, but it’s honest. Morrissey may be vain, but he’s not too vain to hide his unpleasantness and, through that, the way he sees the world. For this reason alone, Autobiography is essential reading.”

“With typical pretension, Morrissey’s first book has been published as a Penguin Classic. It justifies such presentation with a beautifully measured prose style that combines a lilting, poetic turn of phrase and acute quality of observation, revelling in a kind of morbid glee at life’s injustice with arch, understated humour, a laughter that is a shadow away from depression or anger. As such, it is recognisably the voice of the most distinctive British pop lyricist of his era. It is certainly the best written musical autobiography since Bob Dylan’s Chronicles, and like that book it evokes a sense of what it must be like to dwell within such an extraordinary mind.”

“For its first 150 pages, Autobiography comes close to being a triumph … There are not many more than 70 pages on the actual experience of being in the Smiths, and around a quarter of those are devoted to complaints about their record label, the supposed commercial underperformance of their singles, and Geoff Travis … after pages and pages of moaning, it all starts to pall … Towards the end, things pick up: he enjoys a career renaissance, moves to Rome, and once again finds romance and companionship with a character he calls Gelato. But a sour taste remains…”

“… as exasperating, coruscating, thrilling and deflating as its creator … There is more than a touch of Joyce’s A Portrait of the Artist As a Young Man about the brilliant opening chapters … It can’t last of course. And it doesn’t. It all starts to go wrong when, for us at least, it all started to go right, with the formation of the Smiths. On page 148, writing of an early rehearsal, there is perhaps the most tin-eared, embarrassing description of their music I have ever read. “The Smiths sound rockets with meteoric progression… bomb-burst drumming… combative bass-playing”. One is reminded of that old axiom about artists being the least perceptive critics of their own work. Morrissey seems to have understood the Smiths less than we did.”

“…this is the publishing equivalent of Qatar 2022 — a bad decision that gets worse the more you consider it… Though there are pages that remind you of Morrissey’s gifts as the great English pop lyricist, there are many more (hundreds more) that make you weep for the lack of a literary Johnny Marr.”

“The droning narcissism of the later stages – enlivened by the occasional flick-knife twist of character sketch, or character assassination (watch out, Julie Burchill) – may harm his name a little. It ruins that of his publisher. For the stretches in which in his brooding, vulnerable, stricken voice uncoils, particularly across his Mancunian youth, Morrissey will survive his unearned elevation. I doubt that the reputation of Penguin Classics will.“

“The truth is out: behind the enigma lurks a crashing bore. He is Alan Partridge with daffs in one hand and a Roget’s Thesaurus in the other … Though he can’t stop ranting against Mrs Thatcher, his admittance to Penguin Classics represents the triumph of Thatcherism, proof positive that there is now no citadel immune to the demands of commerce. This book is a timely reminder that self-pity is an emotion more suitably expressed in four minutes of song than in 450 pages of prose. No grudge passes unreported, no slight overlooked, no scab unpicked.”

“There are many pop autobiographies that shouldn’t be written. Some to protect the unwary reader, and some to protect the author. In Morrissey’s case, he has managed both. This is a book that cries out like one of his maudlin ditties to be edited. But were an editor to start, there would be no stopping. It is a heavy tome, utterly devoid of insight, warmth, wisdom or likeability. It is a potential firelighter of vanity, self-pity and logorrhoeic dullness. Putting it in Penguin Classics doesn’t diminish Aristotle or Homer or Tolstoy; it just roundly mocks Morrissey, and this is a humiliation constructed by the self-regard of its victim.”