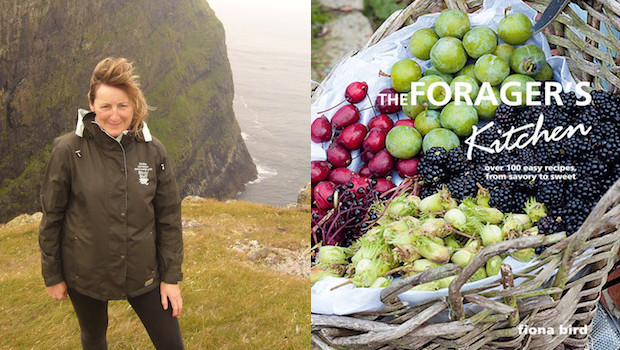 Foraging is very in right now, and you won’t find a better guide to wild fruits and edible weeds than The Forager’s Kitchen by Fiona Bird, Masterchef finalist and one of the few residents of the Outer Hebrides. Here she shares her favourite recipes, her literary inspirations, and tips on how city-dwellers can forage too (and no that doesn’t mean in the bins round the back of Sainsbury’s).

Tell us a bit about yourself:
I am married to the man I met on my first day at St Andrews University and we live on the Outer Hebridean Island of South Uist where my husband is a doctor. I am the mother of six children, most of whom are boys. During my many years as a full time mother I perfected my culinary skills and hood-winked the judges into reaching the final of Masterchef. This gave me the confidence to approach a publisher with an idea for a children’s cookery book. Luckily for me, Barefoot Books published Kids’ Kitchen in 2009. My thoughts then turned from wild children to wild food, again a self-taught skill but one that is readily available to anyone with access to the countryside. That led to a second publication The Forager’s Kitchen in 2013.

Two years ago, my husband took over a single-handed general practice on the Isle of South Uist. As a result, I stopped rushing around Scottish primary schools, where I had encouraged children to cook with real, raw ingredients. Cookery on the primary school curriculum is certainly the way forward but this needs the momentum of Government funding, not just a slightly eccentric wild food enthusiast dashing in and out of hand picked schools.

I now spend a lot of time in a wetsuit pottering around at low tide in search of seaweed hoping that the seals keep their distance or fighting the Hebridean winds on a bike. I’m usually accompanied by a dog called Coco and occasionally by the island doctor or one of the children on a flying visit.

How did you become a forager?
Holidays with my paternal grandmother always involved what she called ‘twigging’ or collecting sticks and fir cones as kindling for her cottage fire. She taught us to look up for dry broken twigs for the basket but also down at fungi growing on fallen tree trunks that were too heavy to move. I learnt from her about wild fruits and flowers and my holiday memories are scented with wild honeysuckle.

Thus, in part because dog rose petals are lightly scented, my sister Nicki and I stripped our grandmother’s garden roses of their petals and crammed them into empty jars in the hope of making ‘rose water’. The thought of the resulting brown, moldy rose petals still fills me with remorse over her empty rose garden. But now I do know how to make rose water, although gorse water is more colourful in icing.

What are your three favourite recipes from The Forager’s Kitchen?
i) Ladybirds in Wild Pesto. My husband calls me Ladybird and this recipe, a savoury variation on Tarte tatin, is fun. It’s seasonal too – with nettles in the pesto and the ladybirds are tomatoes with olives for spots. I rarely fuss with food but this is fun and kids love it.
ii) Blaeberry (bilberry) and Lime Posset. I love the tartness of the wild berries and magnificent colour as they ooze into the rich posset. A simple pudding, which I make in French chocolate pots for two reasons: small suffices and blaeberries are fiendishly tricky to forage – there is usually one berry per stalk. It takes forever as the competition is fierce. I think the deer like them; pigeons certainly do.
iii) Crabapple and Honeysuckle Jelly. Honeysuckle drapes over the low Uist cliffs, where it mingles with sorrel growing in cracks on the rocks (the sight of which, inspired my honeysuckle and sorrel sorbet recipe). However the crab apple is scented and then preserved as a jelly ready to cheer up lamb on a cold winter’s day. Honeysuckle makes great jelly (I have tried it alone) so I presume that the blossom has lots of pectin in it but foraging honeysuckle in the necessary quantity is destructive and I prefer to use crabapple for the bulk. Anything green needs to be removed when cooking with honeysuckle blossom or the end result is bitter – so this little creation is time consuming.

Who is your book targeted at?
The Forager’s Kitchen is a general book, an introduction to foraging, although I hope that it inspires the more seasoned forager too. Many of the recipes are, as my (only) one star Amazon reviewer says, “Available in any old books”.  That said I’ve spared the reader the trouble of hunting down Florence White or trawling through A Modern Herbal by Mrs. M Grieve and Mrs. C Leyel. My Pontack is an adaptation of their Elderberry Ketchup recipe. A tablespoon of Pontack is delicious in a venison stew. The seaweed recipes are original simply because (carrageen pudding aside) there aren’t seaweed recipes in many books, even old ones.

Can city-dwellers forage, or do you have to live in the countryside?
No, the city dweller can frequently encounter dandelion, clover and daisies — summer is here when you can put your foot on seven daisies on the lawn (or park). Why not make meadow flower scented honey? The elder tree roots grow rapidly and enthusiastically on wasteland. Where there are elder roots there are flowers and of course cordial and later berries for vinegar or even Pontack. Unkempt graveyards (the sad ones that folk rarely visit) are a wonderful place to forage and give an interlude of solitude and tranquility in the midst of the hustle and bustle of a big city. Of course city foragers just have to wash foraged edibles with a little more care and should try to avoid picking in polluted thoroughfares.

Why do you think foraging has become trendy recently? Do you think it will ever become mainstream?
Rene Redzepi the chef at NOMA has certainly encouraged wild food on restaurant plates. Interestingly, I was asked me to pick sorrel from Uist when NOMA et al were doing an event at Claridges. Commercial foraging isn’t my scene but I liked the idea of the great chefs hearing about sorrel being gathered on a small Scottish Island so I foraged for Claridges (for my postage, no more). I like to think that most people, who forage for a living, do so sustainably because the fruits of their livelihood would otherwise soon disappear. As for foraging becoming mainstream, sustainability has to be an issue. I’m writing about seaweed at the moment and wild and organic are buzzwords but Irish dulse grown on ropes ie farmed might be a better way forward.

Even expert foragers must make mistakes sometimes! What’s been your biggest foraging disaster?
Kelp stipes (brown seaweed Laminaria digitata or L. hyperborea stalks). I eventually cracked them but with big fat kelp stipes, less is certainly more. One of my boys actually got to the point of pleading for me to cook brussel sprouts, which he loathes, demanding “No more kelp Ma”.

Which writers are your biggest culinary, and literary, inspirations?
Without a second thought, first place goes to Dorothy Hartley’s Food in England. The more recent publication of her Dispatches to the Daily Sketch was bound to appeal to me as somebody who cycles and often ends up picking wild ingredients in ditches. There is simplicity in the bramble junket and her tales of the countryside in the short excerpts make it an easy and inspired read for lovers of the countryside. I especially loved reading Stalking the Blue Eyed Scallop by Euell Gibbons. It wraps cookery and nature into one book — my type of book. Anyone who visits the Outer Hebrides and is interested in food must read The Guga Hunters by Donald Murray. It’s about the ten men of Ness who go on an annual trip to Sulageir to catch guga (small gannets) although of course the reader may not find eating the guga itself particularly tempting. My favourite tattered cookery cook is The Times Cookery Book by Katie Stewart, it has travelled with me from university days and I’ve recently paid a small fortune to ensure that our daughter has one in her university flat. Why do wonderful books go out of print?

What are your favourite examples of foraging in fiction?
My Side of the Mountain by Jean Craighead George is a book for children but grown up foragers can learn from it too. It’s the story of a twelve-year-old runaway boy, who learns about hand to mouth survival and how to take care of a falcon too. I think it must be every foraging child’s dream — self-sufficiency and lots of yummy wild food.

Not strictly fiction but the chatty letters between the great British mushroom man Roger Phillips and Leslie Land (Maine) are a joy for anyone who enjoys cookery and gardening to read. There is conversation about eating weeds and of course they discuss mushrooms. The book’s called The 3000 Mile Garden. An Exchange of Letters Between Two Eccentric Gourmet Gardeners.

What are you working on at the moment?
A Cook’s Guide to Seaweed. The recipe development has been innovative, verging on eccentric at times and the history of seaweed simply fascinating. Having researched the various phases of the British kelp industry, I was delighted to find that seaweed had what might be described as a  ‘cult following’ during the Victorian era. A new seaweed factory, Asco (taken from the name of a seaweed which they mill Ascophyllum nodosum) has opened on North Uist and thanks to NOMA and other chefs there has been a surge in interest in sea vegetables. Seaweed is one to watch.

The Forager’s Kitchen is published by Cico Books.