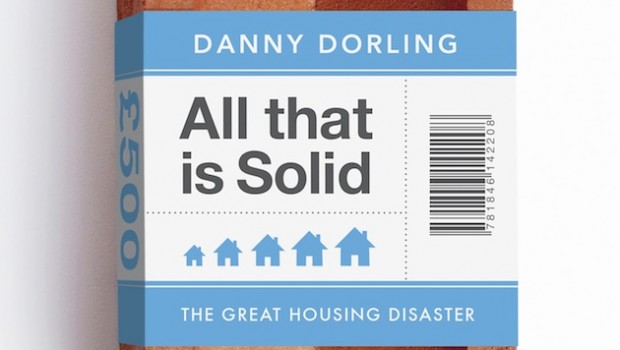 All That Is Solid: The Great Housing Disaster by Danny Dorling

Blurb: Housing was at the heart of the financial collapse, and our economy is now precariously reliant on the housing market. In this groundbreaking new book, Danny Dorling argues that housing is the defining issue of our times. Tracing how we got to our current crisis and how housing has come to reflect class and wealth in Britain, All That Is Solid radically shows that the solution to our problems – rising homelessness, a generation priced out of home ownership – is not, as is widely assumed, building more homes. Inequality, he argues, is what we really need to overcome.

“Brilliantly original… A few of Dorling’s proposals to redistribute space are as old as Lloyd George’s liberalism: a national land tax, for instance. Others ought to be uncontroversial: use the tax system to discourage second homes, holiday homes and empty commercial property; bring back rent controls; and give homeowners the “right to stay” as tenants if they can no longer afford to pay a mortgage. It is only because we are caught in the mania of a bubble market that we think we cannot change.”

“In tone and thesis, this book is not dissimilar to Richard Wilkinson and Kate Pickett’s 2009 study The Spirit Level: Why Equality is Better for Everyone. No doubt the reaction to All that is Solid will be just as polarised, embraced on the Left while the details are nit-picked apart by critics on the Right, blind to its fundamental accuracy. All that is Solid is a powerful and important book for these times, albeit not one without flaws. It has an angry urgency that at times enhances the power of its arguments but elsewhere defuses them. It would have benefited from tighter, closer editing. There is a feeling of repetition in places, and a shorter, more focused book might have landed its blows more cleanly. Then again, perhaps it is appropriate that it sits, brick-like, in the hand.”

“One of the most interesting aspects of All That Is Solid is its attention to the north, and to Sheffield in particular – every one of the photographs in the book was taken in that city, as if to prove the point that the housing crisis goes well beyond mere expense, and certainly far beyond the question of the “quality” of housing.”

“One of the flaws in Dorling’s breathless book is that his argument for a culture shift is never properly explained. This deprives his account of the history it requires. When was his supposed golden age? The chapters are ostensibly structured by theme (“Building”, “Buying”, etc) but these are flimsy guides. More than once we are given the impression of a book written in haste (the phrase “as I type” appears twice as an annoying reminder of the means of production). The graphics rarely illuminate. Nevertheless, as any regular viewer of Location, Location, Location can attest, the quality of construction is not always a guide to value. Dorling grasps the importance of the issue. His urgency is warranted. The professor is also often correct. Dorling is right to say that the housing problem is an inequality problem.”

“Dorling’s polemic will make you either nervous — or angry if you have bought a place of your own… In my role as this paper’s property and money editor, I hear from all sides in the housing debate, both from those sitting pretty on a pile of equity and those who feel dispossessed. All parties will admit that the current housing model is broken… However, not only are Dorling’s solutions extreme (meaning that they would meet with considerable resistance) they would also take a long time to implement. A radical change to society would be required, the most difficult part of which would be the extinction of the complex emotions surrounding home ownership.”

“The bias to the left runs through the book, and occasionally you sense Dave Spart may be about to grab the pen… The ridiculous can also slide into snide generalisation… Dorling is also not well served by his editors: the book is full of repetition (nearly every chapter contains the homily that we have enough bedrooms already) and short of real people. I wanted to hear more voices of those who had lost out in the housing race — poor London families who face being sent to Liverpool for a council house, perhaps — and from the millionaires a few yards away who think hollowing out nearby streets to create gyms and cinemas is a good use of money. For all its faults, however, Dorling’s book represents an alternative view to the blind acceptance of the current situation.”

All That Is Solid: The Great Housing Disaster by Danny Dorling The Omnivore