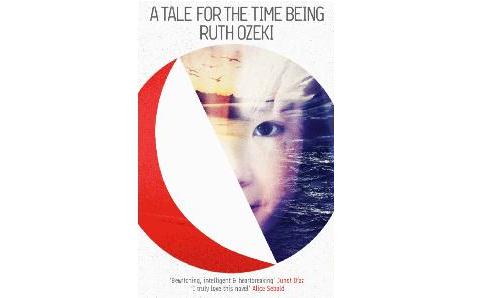 Blurb: Within the pages of this book lies the diary of a girl called Nao. Riding the waves of a tsunami, it is making its way across the ocean. It will change the life of the person who finds it. It might just change yours, too. (Canongate)

“What holds the novel together, as it widens into slightly ineffable questions of quantum mechanics and parallel worlds, is the pulse of Nao’s voice, which Ozeki captures wonderfully. Researching the life of Jiko, Ruth finds an academic journal that refers to the old nun’s early writing – a feminist ‘I novel’ – and praises it as ‘groundbreaking, energetic, and radical’. The same, and more, could be said of A Tale for the Time Being.”

“… reading the diary links Ruth to Nao in a deep way; the act of reading having influence over the act of story-telling and vice versa. The warmth, compassion, wisdom and insight with which Ozeki pieces all these stories together will have the reader linked in a similarly profound way to this fantastic novel.”

“[It] may sound rather grim but, while Ozeki is unflinching about life’s brutalities, she is also a deeply uplifting writer. She is tender and playful and constantly puzzles over life’s conundrums — not least the act of literary creation itself … It may also sound postmodern and affected but, really, it is not. Ozeki never becomes abstract or silly. Indeed, her exploration of what it is to be “time beings” feels thoroughly rooted in reality. ”

“[It's] heady stuff, but it hangs together for a couple of reasons — the exuberance of Ozeki’s writing, the engaging nature of her characters and, not least, her scrupulous insistence that it doesn’t have to hang together, that even as she ties up loose ends, others come unbound.”

“Ozeki was brought up in Connecticut by an American father and a Japanese mother. She is also an ordained Zen Buddhist priest, and the teachings of Zen Master Dogen, a 13th-century practitioner of zazen meditation, are woven into the text – though at times the stitch work is a little too mechanical.”

“This is packed with philosophical asides about time, and is unexpectedly moving.”

“The pleasure of this book is the way in which, with its inclusive references to everything, from history to quantum physics, Buddhist practices to literary theory, Silicon Valley to Japanese temples, it stretches the boundaries of the novel while managing to remain intensely readable … There’s warmth, wit and wisdom within the book, but I’d somehow hoped for a particularly new and revelatory nugget at the end”

“Seen from space, or from the vantage point of those conversant with Zen principles, A Tale for the Time Being is probably a deep and illuminating piece of work, with thoughtful things to say about the slipperiness of time. But for those positioned lower in the planet’s stratosphere, Ozeki’s novel often feels more like the great Pacific gyre it frequently evokes: a vast, churning basin of mental flotsam in which Schrödinger’s cat, quantum mechanics, Japanese funeral rituals, crow species, fetish cafes, the anatomy of barnacles, 163 footnotes and six appendices all jostle for attention. It’s an impressive amount of stuff. One version of you might be intrigued. Another might pray it doesn’t land on your shore.”

A Tale for the Time Being by Ruth Ozeki The Omnivore