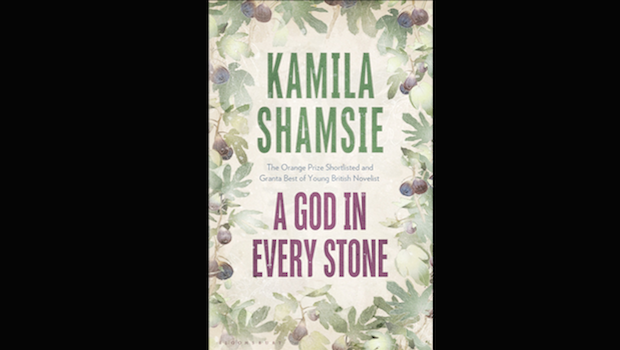 A God in Every Stone by Kamila Shamsie

Blurb: July 1914. Young Englishwoman Vivian Rose Spencer is running up a mountainside in an ancient land, surrounded by figs and cypresses. Soon she will discover the Temple of Zeus, the call of adventure, and the ecstasy of love. Thousands of miles away a twenty-year old Pathan, Qayyum Gul, is learning about brotherhood and loyalty in the British Indian army. July, 1915. Qayyum Gul is returning home after losing an eye at Ypres, his allegiances in tatters. Viv is following the mysterious trail of her beloved. They meet on a train to Peshawar, unaware that a connection is about to be forged between their lives – one that will reveal itself fifteen years later, on the Street of Storytellers, when a brutal fight for freedom, an ancient artefact and a mysterious green-eyed woman will bring them together again. (Bloomsbury, April 2014)

“Shamsie is adept at excavating the past and braids the personal and political to great effect. All the while she builds tension and keeps us guessing about the fate of her characters. The end result is both complex and spell-binding.”

“Alongside the novel’s archaeological excavations, Shamsie excavates the deepest, darkest corners of the human heart, unearthing a hot lava of emotion. She evocatively depicts the surfaces of everyday life and then tunnels far beneath them; Tahsin, for example, probes not only archaeological sites but the sometimes seemingly impenetrable Vivian, trying to “understand the rapid staccato of her heart”.”

“Contemporary fiction has increasingly engaged with the Raj, from Salman Rushdie’s Midnight’s Children (1981) to Philip Hensher’s The Mulberry Empire (2002). A welcome addition to the genre, Shamsie’s novel, drawing lines of connection across times and places, evokes the past beautifully. At the same time, it is a moving story of love and betrayal, generosity and brutality, hope and injustice, full of characters that stay with you.”

“Shamsie keeps her symbolism firmly under control, deploying a clear, plain narrative style and a traditional realist form. These work well, given how much of the novel is necessarily expository, packed with names and historical facts. Its publication neatly timed to coincide with the anniversary of the First World War, A God in Every Stone concerns itself with stories left out of official accounts.”

“[It] might sound a bit  ho-hummish, but this is a novel that’s far from run of the mill. The main characters and their story-lines are strong enough in themselves, but they also combine very cleverly to build to a dramatic climax … intelligent, vivid and completely absorbing.”

“A God in Every Stone is an ambitious piece of work, and its pages are lit by Shamsie’s eloquent prose. Her feeling for place is sensitive and sometimes exquisite. The flowering orchards of Peshawar are as vivid as the blood hosed by firemen from the streets of Qissa Khwani Bazaar. However, when it comes to character and event, it is often easier to see what Shamsie is aiming at than to feel the arrows of her intentions hitting their target.”

“Shamsie, who appeared on Granta’s list of the best young British novelists last year and whose 2009 novel Burnt Shadows was shortlisted for the Orange prize, has produced a fast-moving, well-researched story that reminds us of the contradictions of Empire in the age of the first worldwide war. Despite a  weakness for poetic symbolism that makes figs or the circlet almost characters in themselves, her sentences are surprisingly unadorned.”

A God in Every Stone by Kamila Shamsie The Omnivore