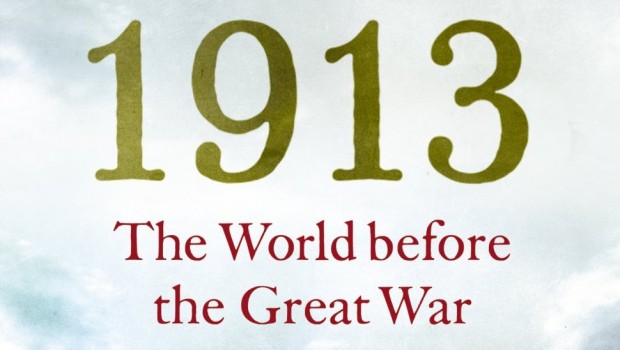 1913: The World before the Great War by Charles Emmerson

Blurb: Forever in the shadow of the war which followed, 1913 is usually seen as little more than the antechamber to apocalypse. Our perspectives narrowed by hindsight, the world of that year is reduced to its most frivolous features – last summers in grand aristocratic residences, a flurry of extravagant social engagements – or its most destructive ones: the unresolved rivalries of the great European powers, the anxieties of a period of accelerated change, the social fear of revolution, the violence in the Balkans. Our images of the times are too often dominated by the faded pastels of upper-class indulgence or by the unmitigated blackness of a world rushing headlong into the abyss of an inevitable war.

1913: The World before the Great War proposes a strikingly different portrait, returning the world in that year to its contemporary freshness, its future still undecided, its outlook still open. Told through the stories of twenty-three cities – Europe’s capitals at the height of their global reach, the emerging metropolises of America, the imperial cities of Asia and Africa, the boomtowns of Australia and the Americas – Charles Emmerson presents a panoramic view of a world crackling with possibilities, from St Petersburg to Shanghai and from Los Angeles to Jerusalem.

What emerges is a rich and complex world, more familiar than we expect, connected as never before, on the threshold of events which would change the course of global history.

“… a masterful, comprehensive portrait of the world at that last moment in its history when Europe was incontrovertibly ‘the centre of the universe’ and, within it, London ‘the centre of the world’ … This is no ‘swagger portrait’ of an age in the Barbara Tuchman tradition — Emmerson writes with the same dispassionate calm of the bougainvillea and magnolia of Algiers as he does the abattoirs of Buenos Aires — but ‘colour’ comes cheap and this is an immensely impressive book.”

“Emmerson, a historian at the Royal Institute of International Affairs, often loses sight of the broader picture. What links the cities thematically? Railways? Electric street lamps? On the whole, though, 1913 has narrative verve and insight. In lesser hands, a book that combines more than 500 pages of cultural history with pop sociology might easily stagnate.”

“This book is a terrific idea … The trouble is that it doesn’t quite come off … I was expecting an examination of key events from different national perspectives that would provide a snapshot of the world in 1913. What we get is a series of independent essays … Emmerson leaves us to draw our own conclusions too much. As the expert it would be nice to know what he thinks.”

“Emmerson has done his homework. His book girdles the earth in an impressive fashion and conjures up a world we have lost. On the whole, however, 1913 is a disappointment. It lacks sparkle. It gives potted histories in the manner of Wikipedia and resembles a hasty travelogue, covering too much ground to permit exploration in depth. Moreover, the book comes to no very definite conclusion. Despite his emphasis on how modern and globalised the planet had become by 1913, Emmerson can’t seem to decide how much truth there is in the view that the year was a golden coda to an age of innocence and order.”

“A perfectly pleasant but ultimately vapid tour of the big cities of the world in 1913 … Emmerson writes nicely and the text is sprinkled with anecdotes, but the book is very loosely focused. At times he seems unsure whom he is writing for and how much he needs to explain. But the real difficulty is that the project is flawed — 1913 lacks a thesis to tie together the global history and the history of a single year … And at over five hundred pages, the book is too long.”

“There is some attempt at discussing painting, literature and architecture but it’s a bit half-hearted … Emmerson, reasonably enough, does not peddle an overarching thesis to link his individual portraits of cities, states and empires but he is good on racial fears and tensions — and not only in the context of European colonialism.”

“Emmerson’s book is capably researched, but the overall concept is inadequate and lacks purpose. Readers are left to work out for themselves how the world did actually change between 1913 and 1918, and instead are treated to a formulaic analysis of the great cities deficient in both insight and originality. This is narrative history without a narrative: it fails to tell a story, and one can’t help but feel it is the first of many attempts to jump on the Great War centenary bandwagon.”

1913: The World before the Great War by Charles Emmerson The Omnivore