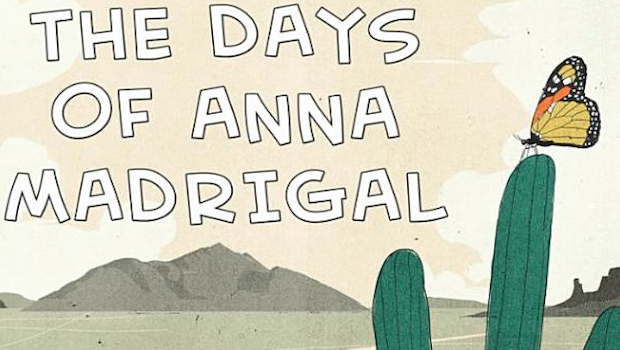 The Days of Anna Madrigal by Armistead Maupin

Blurb: The Days of Anna Madrigal, the suspenseful, comic, and touching ninth novel in Armistead Maupin’s bestselling “Tales of the City” series, follows one of modern literature’s most unforgettable and enduring characters-Anna Madrigal, the legendary transgender landlady of 28 Barbary Lane-as she embarks on a road trip that will take her deep into her past. (Doubleday, January 2013)

“If you’ve never read Tales of the City or the seven novels that come between it and The Days of Anna Madrigal, this is not the place to start, and if you have even the slightest hankering for freedom or capacity for joy, do yourself a favour and go and find the first book right now … Much of the appeal of The Days of Anna Madrigal derives from catching up with familiar characters, so a goodly chunk of exposition has to be got out of the way before you start to notice how vividly Maupin writes, with the economy of a good journalist and the instincts of a poet.”

“Jake and Ben play a full role too in The Days of Anna Madrigal, which proves just as taut and inventive in its plotting – and as radical in its pursuit of distinctively alternative values and ways of living to celebrate. Jake and Ben generously bridge the generational divide. For increasingly, where sexual and gender identity threatened to separate Maupin’s protagonists in the Seventies, differences imposed by age look most challenging today.”

“I don’t want to give away the plot, which is both surprising and at the same time reassuring, as it needs to be. Let’s just say he writes with great compassion about growing older and what we do to help one another through.”

“The Days of Anna Madrigal is a genial fable. Like the earlier Tales, it’s riddled with outlandish coincidences and best enjoyed under the willing suspension of disbelief. Told in Maupin’s roving style — call it third-person kaleidoscope — the narrative braids Anna’s story, childhood flashbacks and scenes of her adopted kin, many of whom are preparing to attend Burning Man.”

“Now that the culture has caught up with the books, Mr. Maupin’s frank exploration of the lives of Anna and her makeshift family — the surrogate sons Michael and Brian Hawkins and daughter Mary Ann Singleton, and the spouses and children they’ve sprouted — doesn’t have the radical bite beneath the chummy veneer. But for those who’ve followed these characters through the decades, the new book provides a necessary valedictory lap: a final toke, if you will, on a literary joint that has provided a light, sweet high for a long time.’

“It’s a satisfying and appropriate ending both to Anna’s story and to the series as a whole. Seen at last in its entirety, Tales of the City remains an immensely readable accomplishment that wears its significance lightly. Like the volumes that preceded it, The Days of Anna Madrigal entertains, illuminates and — as always — leaves us wanting more.”

“As full of coincidences as the early novels, but, sadly, lighter on laughs. It is also as full of contemporary references as a teen magazine. Maupin veers between the almost poetic and the overly banal. The narrator talks about “deal-breakers” and “getting with the programme” in the same tone as Shawna talks about a dress worn “as a nod to Lena Dunham”. This gives the whole thing a sense (which you could say matches the theme) of built-in obsolescence. It is a shame, because Maupin is an excellent storyteller, and there is something touching about the sweetness at his work’s core.”

The Days of Anna Madrigal by Armistead Maupin The Omnivore